Mary-Carrol Potter, a 78 year old Washington resident, is opting to remain in her home rather than accept her children’s offers to put her up. The issue was that her children were spread all across the globe, and she had no interest in uprooting from the village in which she had lived for half a century. In the past, the difficulties inherent in living on your own at such an age would likely leave Potter with no option but to move in with her kin. However, thanks to what the Washington Post has called “a phenomenon that has swept through the Washington [among many cities] at an astonishing rate”, Potter has been able to remain in her hometown.

This phenomenon of which I speak is the emergence of “senior villages” which organize volunteers available to assist seniors in difficult tasks, allowing them to live otherwise independent lives. The volunteers offer to mow the lawn, provide transportation, deliver groceries and generally offer “anything the seniors want and need”. Potter cites volunteers coming in to change the ceiling lights or do the caulking, claiming that they make up for most of the utility provided by a child living nearby.

Potter’s desire to remain in her home is both common and relatable; according to a study conducted by the AARP, 88 per cent of seniors would choose to live at home as long as possible.

These senior villages exist in multiple metropolises across the USA, Canada, Australia and Netherlands, with over 120 villages in existence and another 100 in development. These villages are run by volunteers and paid staff, allowing for very affordable membership.

In reading about these villages, what I have found most interesting is the sense of community which these villages provide. These communities allow members to not only foster relationships with helpful volunteers but also other participants. One village is even noted to have a weekly happy hour.

I believe that organizations such as these are the second half of the puzzle. In addition to the architectural products that we sell, these villages offer the human services which, together make for a safe and efficient independent living situation. My hope is for as many elderly to stay at home as long as possible, and as residents such as Mary-Carrol Potter are discovering, it is getting easier by the day.

Single Piece: Typically used in new construction projects with ample access to the bathroom.
Multi-Piece: Used in remodel projects where single piece units cannot be brought into the bathroom.
Pan: Pan only (excluding the shower walls).

Barrier Free: Low entry accessible shower.
Code Compliant (ADA/ANSI): Designed to meet the requirements of ADA, ANSI and California T24 regulations.
Corner: To be installed in a corner, with a threshold on 2 sides.
Curbed: A non-accessible product with a regular 5.75″ curbed threshold.
Need It Now: Bundled kits that are ready to ship the next business day.
Pans: Pan only (excluding the shower walls).
Tub Shower: Tub/Shower combination.

Dimensions are measured in Width and Depth, and our shower dimensions list “outside dimensions” (or rough-in dimensions). When standing in front of the shower, Width is the dimension from Left to Right. The Depth is from the Front of the threshold to the Back stud.

A shower threshold is the front edge of the shower that you step over to enter a shower. In code accessible, barrier-free or zero-entry showers it may appear there is no threshold, but in fact, the front is slightly higher than the drain location to help keep water contained within the shower and to drain properly. 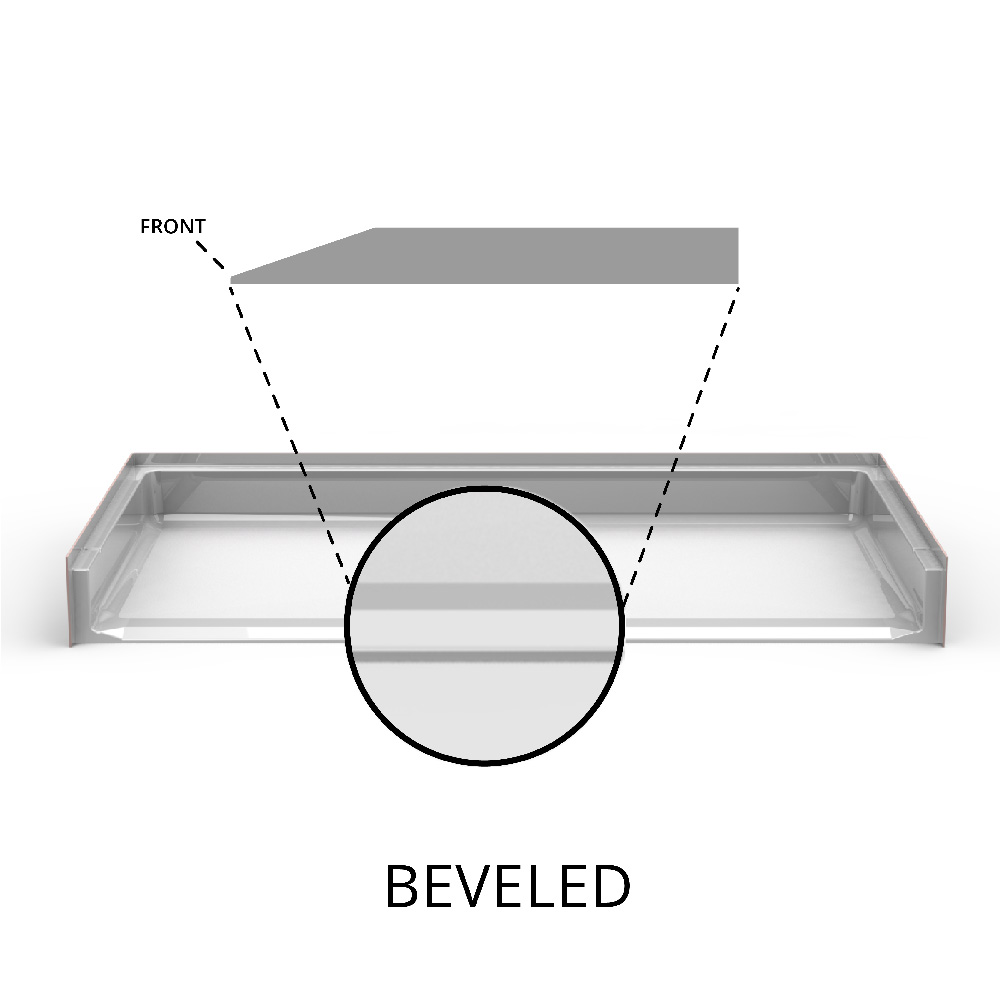 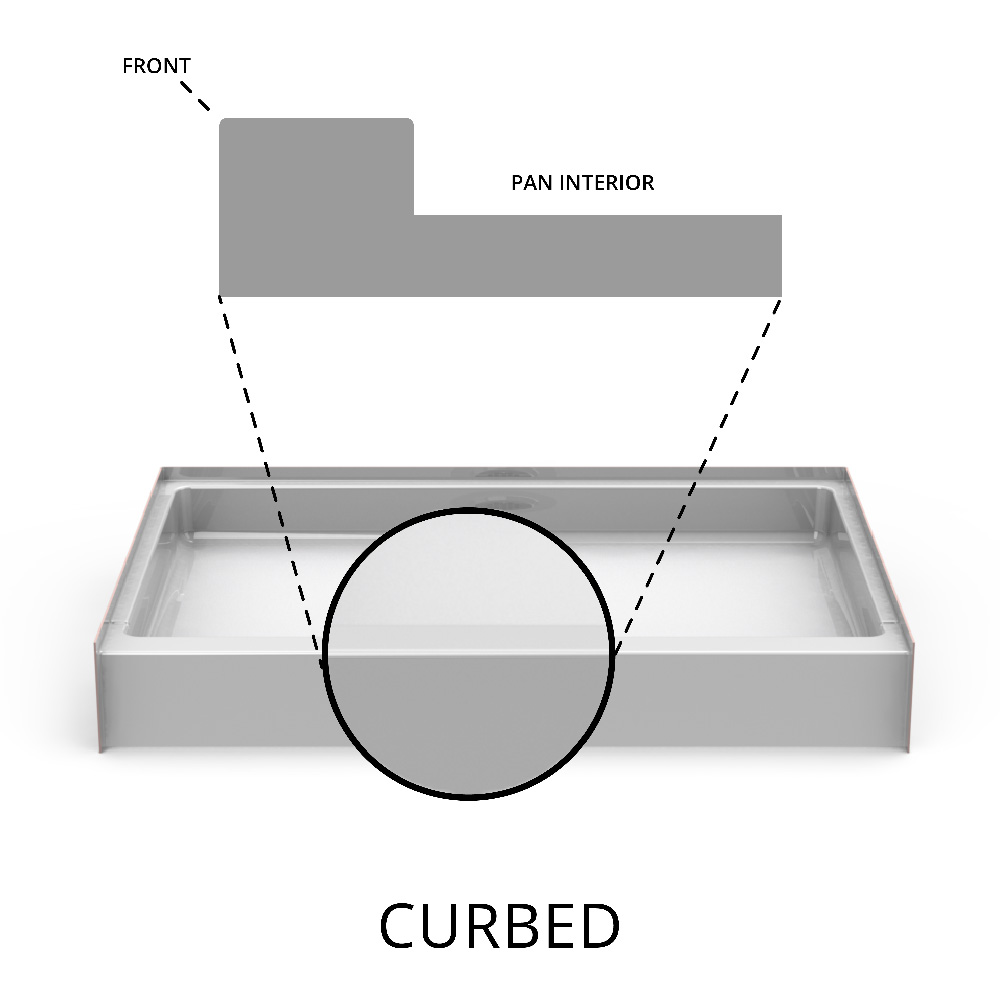 Most showers are available in a variety of finishes for designing a beautiful custom shower for the bathroom. Choose from:

Classic Tile: Our 4” classic tile has subtle ripples for an added dimensional look.

Eight Inch Tile: 8” tile with a smooth or textured finish

Smooth Wall: Our smooth-walls have no tile pattern or design.

Transfer: A transfer shower or shower pan has a 36” x 36” inside clearance and a low-threshold height (1/2″ maximum). It is referred to as a transfer shower as it can accommodate someone approaching the shower in a wheelchair then transferring into the shower or onto an optional shower seat.

Roll-In: A roll-in shower or shower pan has a minimum inside clearance of 60” x 30” and a maximum threshold height of 1/2″. It can accommodate someone who needs to enter the shower in a wheelchair or a rolling shower chair.

The drain location when viewed facing the shower or tub. For some products, we also offer custom drain locations to accommodate difficult remodels.

The major codes, in addition to all International Building Code (IBC), that the product meets or exceeds.

California 24: The State of California’s Energy Efficiency Standards for Residential and Nonresidential Buildings